Research is part of the College's trifold mission of education, research, and patient care. Our research in the Department of Drug Discovery and Biomedical Sciences is concentrated in four areas: 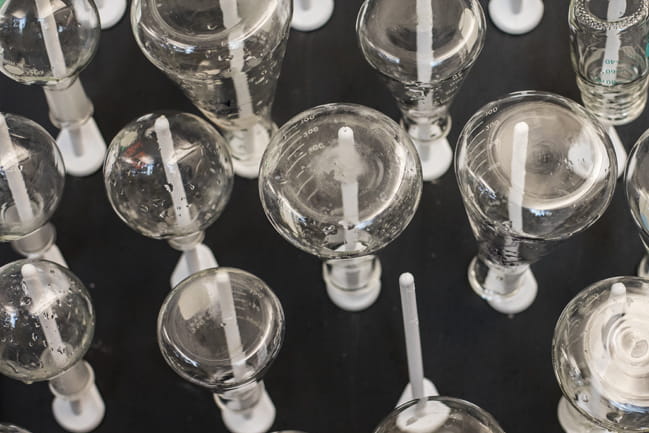 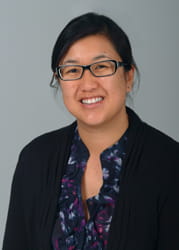 Research in the Chan laboratory focuses on mitochondrial dysfunction and disease. In particular, we are using the zebrafish as a model for mitochondrial diseases. The zebrafish (Danio rerio) is an important vertebrate model organism, offering many advantages for understanding basic biological processes. Breeding pairs can produce hundreds of embryos that develop outside of the mother and are frequently used in high-throughput drug screens. The use of zebrafish embryos and larvae for environmental agent testing is also well established. Furthermore, zebrafish embryos can be genetically manipulated, and because these embryos are transparent, development can be monitored, and phenotypic changes can be scored easily. There are no cures or effective long-term treatments for mitochondrial diseases. To fulfill our long-term goals of developing therapeutic treatments and new biomarkers for the early detection of mitochondrial disease, we are investigating pathways that are important in the development of mitochondrial disease, and the role of environmental and drug modifiers on mitochondrial function. 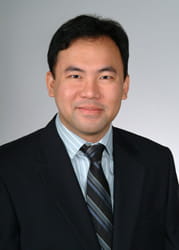 James ChouOur research group aims to understand the roles that mammalian enzymes play in physiological and pathological processes utilizing unique chemical and biological tools. Our current research focuses on the biological mechanism of histone deacetylase 6 (HDAC6) through chemical and biological approaches. HDAC6 is the only HDAC containing two deacetylation domains, and canonical hydroxamate HDAC6 inhibitors only target the tubulin deacetylation domain. We have discovered a highly selective and structurally unique HDAC6 inhibitor capable of inducing both acetylation tubulin and acetylated heat-shock protein 90 suggesting unique and separate substrate selectivity for each domain. Our studies have shown that it is likely each HDAC6 deacetylation domain function is independent of each other function and involved different biological pathways.

We also aim to develop synthetic analogs of vitamin K and vitamin E, and characterize their effects in mitochondria functions. We have developed synthetic analog of vitamin K capable of protecting glutamate induced toxicity in hippocampal HT-22 cells with effective concentration below 50 nM. Vitamin K2 has recently been indicated to be a key component of mitochondria electron transfer chain and it’s capable of alleviating Pink1 and Parkin non-flight phenotype in drosophila. Our vitamin K analogs also protect cells from direct tert-butyl hydroperoxide suggesting additional molecular pathways might be involved at protecting direct peroxide assaults. Our laboratory is interested in defining the key neuro- and cyto-protective mechanism(s) of vitamin K2 and its analogs through both chemical tools and biological techniques.

The ultimate goal of our laboratory is to combine both chemical and biological approaches toward discovering novel biological targets, designing/synthesizing novel compounds, and evaluating the effectiveness of the potential drug candidates in both in-vitro and relevant animal models. 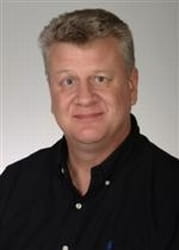 Thomas DixOur research addresses the development and exploitation of novel strategies of rational drug design, with a focus on peptide-based therapeutics. We have demonstrated dramatic improvements in the activities, stabilities, selectivities, and barrier-crossing efficiencies of peptide therapeutic candidates utilizing our strategies, which have been patented. Therapeutic candidates under current development include antithrombotic, antipsychotic, and antiviral peptides; our strategies can be applied to virtually any peptide of therapeutic interest. We also are developing biochemical tools such as receptor-specific peptide analogs, which then will be used to define the detailed physiological roles of individual members of receptor families. 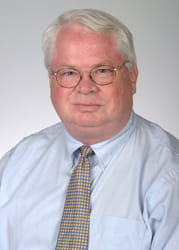 John LemastersDr. Lemasters’ research interests concern the cellular and molecular mechanisms underlying toxic, hypoxic and ischemia-reperfusion injury to liver and heart. His laboratory applies new techniques of laser scanning confocal and multiphoton microscopy to characterize the physiology of single living cells, including the assessment of ion homeostasis, chelatable iron, mitochondrial function, electrical potentials, oxygen and nitrogen free radical formation, membrane permeability, and other biochemical parameters during the pathogenesis of lethal cell injury. These approaches are being extended to true in vivo (intravital) imaging of cells and tissues in living animals.

Increased Ca2+, formation of reactive oxygen and nitrogen species, and oxidation of pyridine nucleotides and glutathione promote a phenomenon called the mitochondrial permeability transition that in turn leads to mitochondrial depolarization and uncoupling of oxidative phosphorylation. Studies in living cells show MPT initially induces the sequestration and lysosomal degradation of mitochondria by the process of autophagy (mitophagy). However, excess MPT induction induces both necrotic cell death and apoptosis during reperfusion injury, oxidative stress, excitotoxicity, calcium ionophore-induced toxicity, drug toxicity, exposure to tumor necrosis factor-alpha, Fas ligation, and organ preservation for transplantation surgery. Inhibitors of the MPT decrease or abolish cell killing in these models. Progression to apoptosis or necrosis after the MPT depends on the presence or absence, respectively, of ATP. Often, features of both apoptotic and necrotic cell death develop after death signals and toxic stresses. These findings offer new strategies to rescue cells and tissues from irreversible toxic and ischemic injury.

Despite a detailed understanding of their metabolism, mitochondria often behave anomalously. In particular, global suppression of mitochondrial metabolism and metabolite exchange occurs in apoptosis, ischemia and anoxia, cytopathic hypoxia of sepsis and multiple organ failure, alcoholic liver disease, aerobic glycolysis in cancer cells (Warburg effect) and unstimulated pancreatic beta cells. The lab is exploring the hypothesis that closure of voltage-dependent anion channels (VDAC) in the mitochondrial outer membrane accounts for global mitochondrial suppression consistent with a role for VDAC as a dynamic regulator, or governator, of global mitochondrial function both in health and disease. 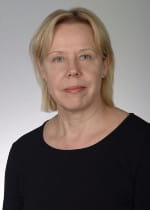 The Anna Liisa Nieminen laboratory is investigating mechanisms of cell injury and cell death in various pathological settings, mostly related to cancer. Currently we are interested in treating head and neck cancers with photodynamic therapy. 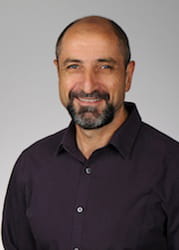 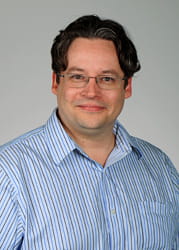 Dr. Peterson’s research focus is in applied pharmacologic sciences using in vitro, cell based, and in silico approaches to quantitate protein and small molecule functionality to bridge between chemical biology and pathobiology. He has experience in the experimental biology and modeling of protein-protein interactions, protein-ligand interactions, and hormone signaling. Specifically, his research efforts have included the study of arrestins, the cytoskeleton, GPCRs, heterotrimeric and monomeric G-proteins, scaffolding proteins (like RGS and AGS G-protein regulators), prenyltransferases, methyltransferases, deacetylases, kinases, lipid binding proteins, mitochondria, and endosomes. Highlight innovations from the Peterson group include the discovery and therapeutic utility (Tat-GPR) of guanine nucleotide dissociation inhibitors, software to analyze endosome kinetics (DotQuanta), the discovery of Gi-alpha suppression in the majority of ovarian cancer patients, and methodologies to optimize virtual screening for drug discovery. Dr. Peterson’s current research focus is on the application of high-content microscopy to study cellular protein kinetics and predictive bioinformatics using QSAR, pharmacophores, and molecular docking.

Prior to his arrival at MUSC in 2002, Dr. Soltis research was focused primarily on the study of vascular smooth muscle physiology and its alterations in hypertension, aging and diabetes using various rodent models.  He received national and local support of his research primarily through the NIH, AHA and DREF.   He was involved for several years in the oversight and direction of a component of the MUSC College of Graduate Studies Summer Undergraduate Research Program.  He currently serves on the MUSC Research Integrity Committee as well as the University Tenure Committee.  Dr. Soltis’ current efforts are directed primarily towards teaching and educational initiatives in the College of Pharmacy.  He teaches and coordinates courses across all three didactic years of the curriculum and actively participates in various academic and educational committees. 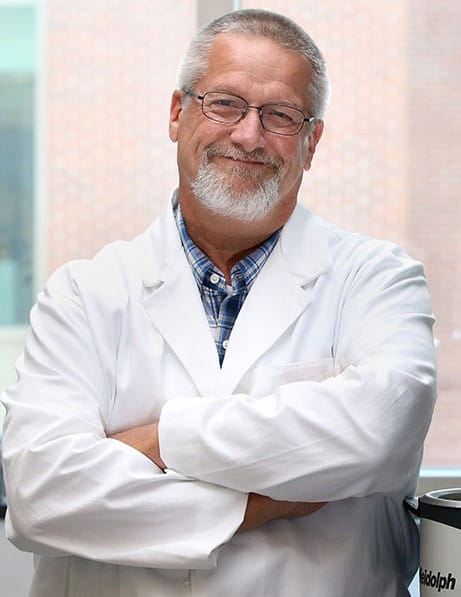 In 2011, Professor Woster moved to MUSC, where he was appointed Professor and South Carolina SmartState™ Endowed Chair in Drug Discovery. Professor Woster maintains an active research program that has been funded by several agencies, including the National Institutes of Health, the World Health Association, and the pharmaceutical industry. Ongoing projects in the Woster laboratories include the synthesis of alkylpolyamines as antitumor or antiparasitic agents, synthesis of novel inhibitors of lysine-specific demethylase 1 and histone deacetylase as epigenetic modulators, solution- and solid-phase synthesis of peptide-based inhibitors of plasmepsin, synthesis of S-adenosylmethionine analogues as mechanism-based enzyme inhibitors, and synthesis of furanocoumarins as inhibitors of cytochrome P450. Dr. Woster has directed a number of Ph.D. dissertations and Master's theses, and has mentored ten postdoctoral associates. To date, he has authored more than 95 articles in peer-reviewed research journals, and more than 100 research abstracts and invited presentations. Dr. Woster has also served as a member of two NIH study sections, and on editorial boards or as a reviewer for numerous scientific journals.

Zhi ZhongMy research interests are on the mechanisms of cell injury, death and regeneration, with foci on the roles of free radicals and mitochondrial function in liver and kidney diseases, and development of novel therapeutics to prevent injury and accelerate the regeneration/repair processes. In particular, using state-of-the-art intravital confocal/multiphoton microscopy, which allows visualization of cells and organelles in live animals, as well as RNAi and molecular biological techniques in combination with a variety of animal models, isolated organ perfusion and cell culture, we are investigating the mechanisms of mitochondrial dysfunction/biogenesis, the cellular, organelle, and enzymatic resources of free radical production, and the roles of free radicals in alteration of signal transduction that subsequently affect pathogenesis and regenerative processes. We are studying hepatic and renal injury, fibrosis and regenerative processes in alcohol and drug exposure, liver and kidney transplantation, ischemia-reperfusion, obesity, and cholestasis. The overall goal of our research is to gain new insights into the mechanisms and to develop effective therapeutics to prevent and treat these hepatic and renal diseases.